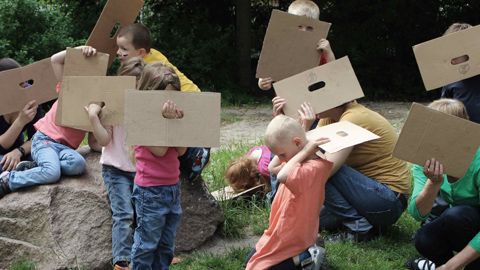 Since 2009, the Astrid Lindgren Stage has hosted the Primary School Theatre Days listed below:

On the following days, schoolchildren from all over Berlin have the chance to delve into the world of theatre. In a variety of workshops teaching about theatre and including stories, dances and songs, the children can playfully and creatively get to grips with a particular subject. Simultaneously, the teachers can take part in discussions to find out about the possibilities of theatre work both at and outside of school.

With an emphasis on the topic of "diversity" and including our choice of production, "Jim Knopf" by Michael Ende, the FEZ hosted its 2016 Theatre Day for Primary Schools between 6th and 9th June. More than 180 children from classes 3 to 5 (ages 8-10) used the opportunity to experience theatre in all its forms for themselves. Each spread across two mornings, the project days included various educational, theatre-based workshops, which all finished with an excellent and informative presentation. From black light theatre to stick puppets and from role play to sound games, every aspect of theatre was covered and the children really enjoyed trying out their acting skills both in the rehearsal room and then on stage.

Registration for our Primary School Theatre Days in 2017 can now be booked at the following email address: alb(at)fez-berlin.de.

We look forward to hearing from you!